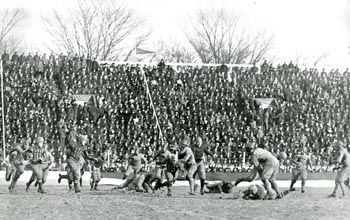 Fight the team across the field
Show them Ohio's here
(We've got the team why don't we)
Set the Earth reverberating
With a mighty cheer
RAH! RAH! RAH!
Hit them hard and see how they fall
Never let that team get the ball
Hail! Hail! The gang's all here
So let's win that old conference now!
(So let's beat that Michigan now!)
(Oh, Ohio! Oh, Ohio! Wahoo! Wahoo for Ohio!)
[Repeat all lines, except the last line]


The recording above is courtesy of Dave Powers. The recording was performed by the Criterion Male Quartette, and was sold by Gennett Records (#10045). It was recorded in 1922 on the "B" side of the 78 RPM recording Football Songs of The Ohio State University. The "B" side contained Ohio and Across the Field. The above link plays only the instrumental/vocals of Across the Field. The instrumentation was played by the Gennett Symphony Orchestra.

"For over 80 years, those words have helped push Ohio teams on to victory. In 1915, OSU student William A. Dougherty, Jr., set out to write the perfect fight song for his alma mater. While Carmen Ohio was already firmly in place as OSU's school song, Dougherty felt that something more exciting was needed for pep rallies and football games. And so Across the Field was born."

[Author's Note: In 1915, one of Ohio State fight songs was Wahoo! Wahoo!, which was sung to the melody of Roll, Jordan, Roll. It is probably the reason why the line "Oh, Ohio! Oh, Ohio! Wahoo! Wahoo for Ohio!" was originally part of Across the Field. Also, it is unknown when the line "So let's win that old conference now!" replaced "So let's beat that Michigan now!". ]

"Introduced at a pep rally for the 1915 Illinois game, Across the Field made its Ohio Field debut at the same game. Though the lyrics are geared to the football field, it has become a rallying song for all Buckeye teams. Its strains are instantly recognized as representing the best of Ohio State, whether played in a TV commercial, a tailgate party, or a women's basketball game. While it has been arranged in many different ways and used for many purposes, its most popular appearance is at Buckeye football games. During tough drives, TBDBITL plays Across the Field to urge the players on to victory. The players conclude every game day by singing it in the locker room at the end of it all."

"Dougherty's Across the Field has been a symbol of the pride and excitement of The Ohio State University for more than 80 years, and it will continue to stand as a great part of this great university."

Across The Field won the President's Cup for the Best University song in the 1916 Ohio State Alumni Association Song Contest.

Listen to the Mr. Duugherty's original piano arrangement of Across the Field, which was published in Songs of Ohio State University.