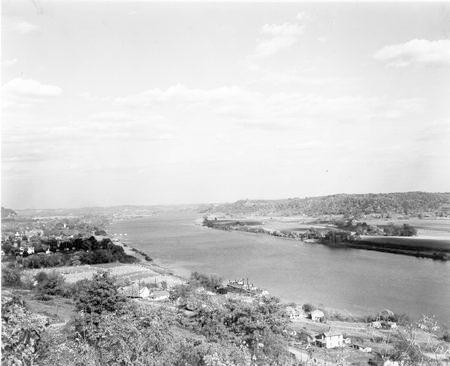 I sailed away;
Wandered afar;
Crossed the mighty restless sea;
Looked for where I ought to be.
Cities so grand, mountains above,
Led to this land I love.

Beautiful Ohio, where the golden grain
Dwarf the lovely flowers in the summer rain.
Cities rising high, silhouette the sky.
Freedom is supreme in this majestic land;
Mighty factories seem to hum in tune, so grand.
Beautiful Ohio, thy wonders are in view,
Land where my dreams all come true!

Long, Long ago,
Someone I knew,
Had a little red canoe,
In it room for two,
Love found its start,
Then in my heart,
And like a flower grew.

Drifting with the current down a moonlit stream
While above the Heavens in their glory gleam
And the stars on high
Twinkle in the sky
Seeming in a paradise of love divine
Dreaming of a pair of eyes that looked in mine
Beautiful Ohio, in dreams again I see
Visions of what used to be.

"Beautiful Ohio, published in 1918, has been used as a march by the OSUMB for many years, and has become the theme song of the OSUMB Alumni Band."

The song was originally composed, as a waltz, by Mary Earl. The original lyrics were written by Ballard MacDonald. Like, Round on the Ends and High in the Middle, Beautiful Ohio, owes it roots to show tune composers; in this case vaudeville. Unfortunately, the actual date of the OSUMB arrangement has not been determined, but it dates to sometime during the 1930s.

Beautiful Ohio became the state song in 1969. In 1989, the Ohio legislature adopted an amendment to section 5.09 of the Ohio Revised Code that revised the words of the state song. The new lyrics were the work of Youngstown attorney Wilbert McBride.

Note: The Ohio State University Marching Band only plays the chorus of Beautiful Ohio. The full lyrics are provided above, as indicated within the original composition. The MP3 file below reflects the song as it was originally written. The MP3 file is courtesy of www.parlorsongs.com.