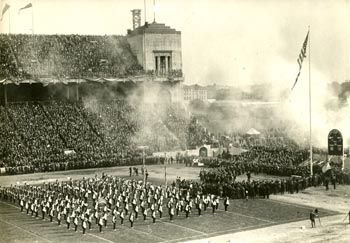 In old Ohio (Columbus) there's a team,
That's known thru-out the land;
Eleven warriors, brave and bold,
Whose fame will ever stand,
And when the ball goes over,
Our cheers will reach the sky,
Ohio Field will hear again
The Buckeye Battle Cry.

Drive! Drive on down the field;
Men of the scarlet and gray;
Don't let them thru that line,
We've got to win this game today,
Come on, Ohio!
Smash thru to victory,
We'll cheer you as you go;
Our honor defend
So we'll fight to the end
For Ohio.

We'll scatter to the east and west,
When college days are done;
And memories will cling around,
The dreams of everyone;
We'll play the game of living,
With head and shoulders high!
And with it wear the spirit of
The Buckeye Battle Cry!

The second recording above is courtesy of Dave Powers. This recording is the 1924 Frank Crumit vocalization of Buckeye Battle Cry. Further information is provided below.

"No traditions stand more revered at in the OSUMB than two: Ramp and Script Ohio. The one thing that both have in common is Frank 'Crumit's Buckeye Battle Cry."

"Buckeye Battle Cry has a long history. It was written by Frank Crumit in 1919. Although Crumit was not an OSU student and was, in fact, a graduate of Ohio University, he had many friends in Columbus and was a Buckeye fan. When planning began for Ohio Stadium, the search for new fight songs to play in it also began. When a song contest was announced for in the spring of 1919, Crumit wrote and entered Buckeye Battle Cry. It won, and was published. By 1928, with the first ramp entrance, Buckeye Battle Cry was firmly in place as another symbol of Ohio State. In addition to being heard at the beginning of every game, TBDBITL plays it every time the Buckeye football team scores. Hopefully the band will continue to play this one many, many times at each football game!"

The second verse was released as part of the 1924 78 rpm recording (see Hi Hi Ohio) of Buckeye Battle Cry, on side A, and Hi Hi Ohio, on side B. A special thank you goes to Dave Powers of Columbus. Ohio, who not only transcribed the second verse lyrics, but also has provided me with a digital recording of the 1924 record. The recording was performed by Frank Crumit. Also, a thank you to Jim Joseph, who has better hearing than I do, for correcting the next to the last line of thesceond verse.