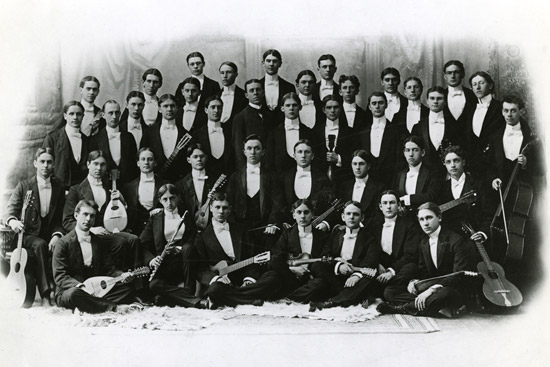 I wanna go back, I gotta go back,
To Old Columbus Town!

Ohio! Ohio!
The hills send back the cry
We're here to do or die,
Ohio! Ohio!
We'll win the game or know the reason why.

Oh! Fight the team across the field
Show them Ohio's here
Set the earth reverberating
With a mighting cheer!
RAH! RAH! RAH!
Hit them hard and see how they fall
Never let that team get the ball!
Hail! Hail! The gang's all here
Yes! We'll win the conference again!

Fight the team across the field
Show them Ohio's here
Set the earth reverberating
With a mighting cheer!
RAH! RAH! RAH!
Cause we're from Ohio!

Campus Echoes is a medley which includes: Wahoo! Wahoo!, Round on the End, I Wanna Go Back to Ohio State, and Across the Field. One interesting element of Campus Echoes is that Wahoo! Wahoo!, while no longer is use as an Ohio State fight song/cheer, is still being performed over 110 years later by The Ohio State Men's Glee Club. This short little song/cheer, written in 1890, continues to live on at least in some form.

The YouTube Video above contains The Buckeye Battle Cry, Campus Echoes (begins at 0:48), Carmen Ohio (begins at 3:35) and Hang On Sloopy (begins at 4:48).

The following is a short history from The Ohio State University Men's Club Web Site:

"The Ohio State University Men's Glee Club was organized in 1875. It is the oldest of hundreds of student organizations available to students at the university. The group has exemplified the university’s dedication to tradition, excellence, and diversity.

During its history the OSU Men's Glee Club has garnered worldwide accolades. Most notably, the Men's Glee Club was unanimously declared "Choir of the World" in 1990 under the direction of Professor James Gallagher in Llangollen, Wales. The OSUMGC was the first male chorus and the first ensemble from the United States to win the competition. The Men's Glee Club has performed at many OMEA, MENC, and ACDA conventions, proudly representing the university at state, regional, and national levels. In 2006 the OSUMGC traveled to Eau Claire, Wisconsin to perform for the 42nd national seminar of the Intercollegiate Male Choruses, Inc."

While The Ohio State University Men's Club had many starts, in its early years (indicated by a number of articles in The Lantern, by 1890 they were firmly established as the musical ambassadors of The Ohio State University. In these early years, they produced the music, provided the inspiration and student spirit of Ohio State; in the latter years of the 19th and early 20th Century. As mentioned earlier. a number of songs are attributed to Glee Club Members, such as: Wahoo! Wahoo!, Carmen Ohio, Ohio, and lesser known songs which comprise about 80% of this web site's songs, in fact. In 1902 and 1904, The Glee Club would publish Songs of The Scarlet and Gray; information on these publications are included on this web site.