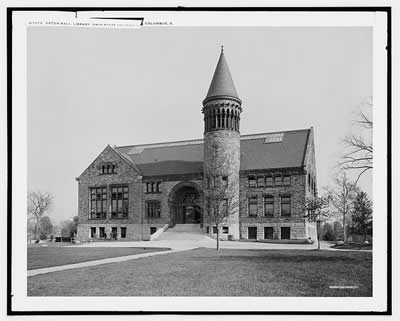 Oh come let's sing Ohio's praise
And songs to Alma Mater raise
While our hearts rebounding thrill
With joy which death alone can still
Summer's heat or winter's cold
The seasons pass the years will roll
Time and change will surely (truly) show
How firm thy friendship ... OHIO!

These jolly days of priceless worth
By far the gladdest days on earth
Soon will pass and we not know
How dearly we love Ohio
We should strive to keep thy name
Of fair repute and spotless fame
So in college halls we'll grow
And love thee better ... OHIO!

Though age may dim our mem'ry's store
We'll think of happy days of yore
True to friend and frank to foe
As sturdy sons of Ohio
If on seas of care we roll
Neath blackened sky or barren shoal
Thoughts of thee bid darkness go
Dear Alma Mater...OHIO!


The recording above is courtesy of Dave Powers. The recording was performed by the Criterion Male Quartette, and was sold by Gennett Records (#10045). It was recorded in 1922 on "A" side of the 78 RPM recording Football Songs of The Ohio State University.

With lyrics written in 1902 by OSU freshman Fred Cornell, Carmen Ohio stands as Ohio State's oldest school song still in use. And as its alma mater, no other song expresses better all the reasons that people love Ohio State; the friends you make here, the good times you have, the pride you feel, whether you're an Ohio State student or just a fan. Set to the Christian melody, Spanish Hymn, aka Spanish Chant, the sounds of Carmen Ohio bring a tear to the eye and a lump in the throat.

There is also a story behind this song. In 1902, Ohio State played Michigan in Ann Arbor and lost the game 86-0. Fred Cornell, who attended the game, was a member of the Ohio State University Glee Club and a four letter athlete. On the train ride home he began to compose a song for Ohio State, by writing phrases on the back of an envelope. Inspired by the loss and hearing the Wolverine crowd sing The Yellow and Blue, Cornell proceeded to pen the hymn. Carmen Ohio was first performed by The Ohio State University Glee Club, on December 11, 1903. Carmen Ohio gained in popularity after it was first published in The Lantern on October 10, 1906 (below) and appearing in the Ohio State-Michigan game program on October 20, 1906. The word "Carmen" means "song or poem", in Latin and Spanish, and hence the translated title of the alma mater means Song of Ohio or Ohio's Song. 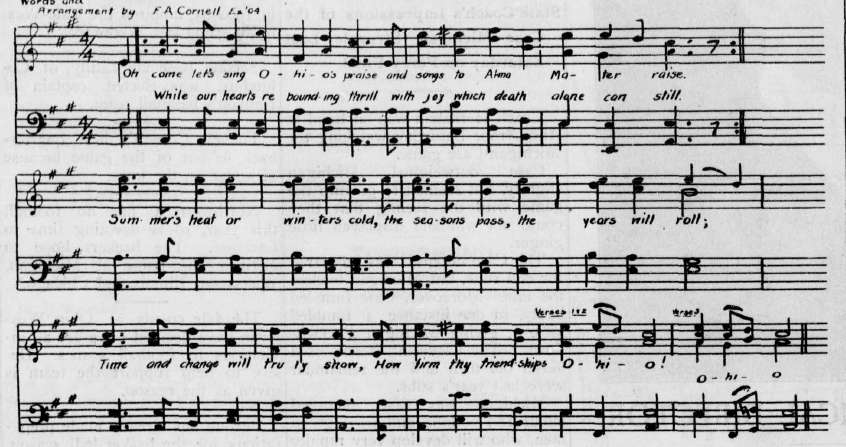 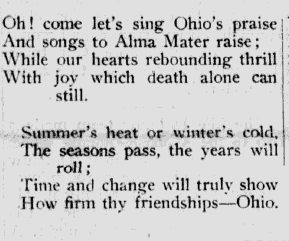 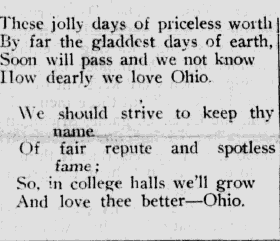 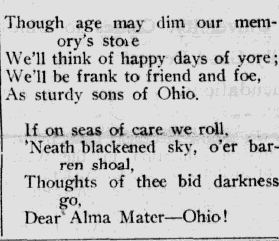 [Author's Note: It is unknown why the word "truly" was changed to "surely" in the first verse.]

The following paragraph is from the Ohio State Marching Band yearbook Script Ohio:

"Adapted for brass band in 1955 by director Jack Evans and arranger Richard Heine, the sound of the Orton Hall chimes was added to the beginning of Carmen Ohio, and yet another tradition was born."

Orton Hall was Built in 1892, and the chimes were installed in 1915. The chimes in the Orton Hall tower ring out the hours daily, and the Carillon is still played regularly. Daily at noon and 5:00 P.M., Carmen Ohio, Buckeye Battle Cry, Across the Field, and other Ohio State songs peal out of the tower and float across the Oval, reminding all that Ohio State is the best place to be!"

On the October 25th, 2002 centennial of Carmen Ohio, Robert B. Stevenson, provided insights to the history of Carmen Ohio. The speech was given at the Agonis Club of Columbus luncheon held at the River Club.

In the April, 1916 issue of Ohio State University Monthly, was published Acrostic, to the melody of Carmen Ohio. The lyrics, are as follows (By the way, along the left column, you will notice it spells OHIO STATE UNIVERSITY):

OHIO!!
Here, we know,
Is a glorious name,
Our hearts to thrill.

Since it is
To her we owe
All
That gives us
Effect unto our will.

United,
Now
In
Voices gay,
Every loyal,
Ringing true,
Scarlet rose and ribbon gray, OHIO STATE
I sing
To
You!!

Listen to the Mr. Cornell's original piano arrangement of Carmen Ohio, which was published in the October 10, 1906 edition of The Lantern.

Photo: Circa 1910 Orton Hall, Courtesy of The Ohio Historical Society