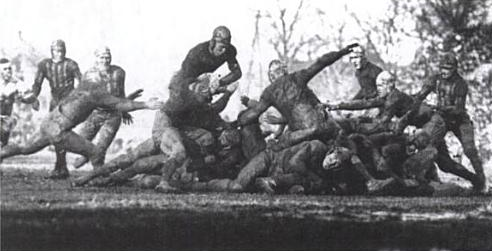 In providing this page, I am trying to bridge the area between songs and cheers. There are over 100 songs, on this web site, that were written about Ohio State. Prior to 1906, there was a tendency at Ohio State to use a chorus of a contemporary song and create a cheer. The only established fight song was Wahoo! Wahoo!, which was really a cheer using the melody of Roll, Jordan, Roll. So, until Grand Old Ohio State, Ohio and Varsity came into use, in 1906, there was a reliance on various chorus' and cheers.

On this page, are a set of songs that were used at the 1900 Ohio State - Michigan game. Generally, these songs could be used for competition with other teams, by substituting "U. of M.", "Michigan", and "Ann Arbor" with the desired school or city. For this page, I chose to just to provide the lyrics and the melody used, as opposed to creating a page for each song, with MIDI, score, etc. By the way, Ohio State and Michigan fought to a 0 - 0 tie, at Regent Field in Ann Arbor.

So, provided below are the song cheers for the 1900 Ohio State - Michigan game. One song, Hot Time In Columbus Tonight is provided on a separate page, as it was a complete song and because it originated from the University of Wisconsin. These songs really did exist and they were used, and they are provided here for historical purposes.

Melody - Just Because She Made Them Goo-Goo Eyes

Melody - I'll Leave My Happy Home For You

Melody - Just As The Sun Went Down

Our foot ball team's the best in fourteen states,
Our captain's just as fine,
Champions they with their scarlet and gray
Pennant for ninety-nine,
O. S. U.'s picking will be so fine,
T'will make old U. of M. frown,
Just as the sun goes down.

U. of M., just get your gun,
We've come to make you run,
This time we'll win
We've come to get your tin,
Long may our colors win,
This day glorious for who? Great O. S. U.

Hello, you has beens,
Hello, you would be's;
Hello, you can't play ball;
Watch us run up the score,
U. of M. you must be sore.
You cannot beat us anyway you play us,
Then you'll be champions no more,
Oh, U. of M., you have no show at all.

During the late 1800s, early 1900s, a number of additional parodies were written for the major football games of the season. Usually these parodies were written prior to the annual Thanksgiving and Michigan games. The following were published in The Ohio State University Lantern and are a sampling of various parodies published. And like the songs above, these songs really did exist and were sung at football games.

Shout the news together, boys, the Jayhwaks are in town!
How O. S. U. will go up and how the Kenyons down!
How we'll buck the rush line, boys, and win such great renown;
While smashing through Kenyon.

All our men have grit, you know, THey'll stand up to the last;
We'll show the men from Gambier town O. S. U. is too fast.
How the grandstand wild will cheer, the bleachers stand aghast!
While we go smashing thro' Kenyon.

Sing a song together, boys, the Kenyon's team in town;
The won't do a thing at all, but try to turn us down.
Wait until the game is o'er, and then we'll own the town,
While we go smashing thro' Kenyon.

Oh, Indiana what a shame,
That you should lose another game;
But we hope you'll not be sore
When Ohio's boys run up the score,
Back to the woods where you came form,
And tell 'em how the Buckeyes won,
And that you added to your woes
When you found how Ohio goes.

All hail the power of O. S. U.
Let rivals prostrate fall,
Bring forth our fearless football team,
And crown them king of all.

It's just the same old team a-playing
Just the same old speedy game,
For they are players that are winners,
And deserving of the name,
And we will root for them right gladly,
It's the most that we can do.
Same husky fellows
from O. S. U.,
Same victory coming
Michigan, skidoo!.

Here, boys, here we are cheering for you, you, you.
Play, boys; take the ball right along thru', thru', thru'!
Touchdown! That's what we're wanting from all of you!
Vict'ry! Vict'ry is waiting for O. S. U.

We'll do anything, State, in the world for you;,
We'll do any team, too, you tell us to.
We did not do much for Wooster, Mus-kin-gum, Dennison,
But, we'll do everything, yes, Michigan, with you.

Michigan, we're here again,
We've come with yell and song.
Our team is good and strong.
Down the field we'll take the ball
And never, never stop at all
Until we've cross the goal.
And then we'll cheer--
That's why we'll here--
Hurrah for O-hi-o!

Every man upon his feet and let the chorus ring,
For win or lose it's up to us to shout and cheer and sing,
Who knows but what this very yell may help to victory bring,
We must beat Michigan.

Author's Note: As you noticed, in two of these cheers, the cultural standards of the early 1900s precluded certain words from being published, as they were considered offensive. The use of the words "Hell" and "Damn", in Victorian times, was nearly equal to the several offensive words that are in use today (those words were also around during Victorian times). There were ways that students became creative in trying to use offensive words in cheers and song. The two songs on this website, Bohunkus, and Yell, Ike, Yell are great examples of this creativity.