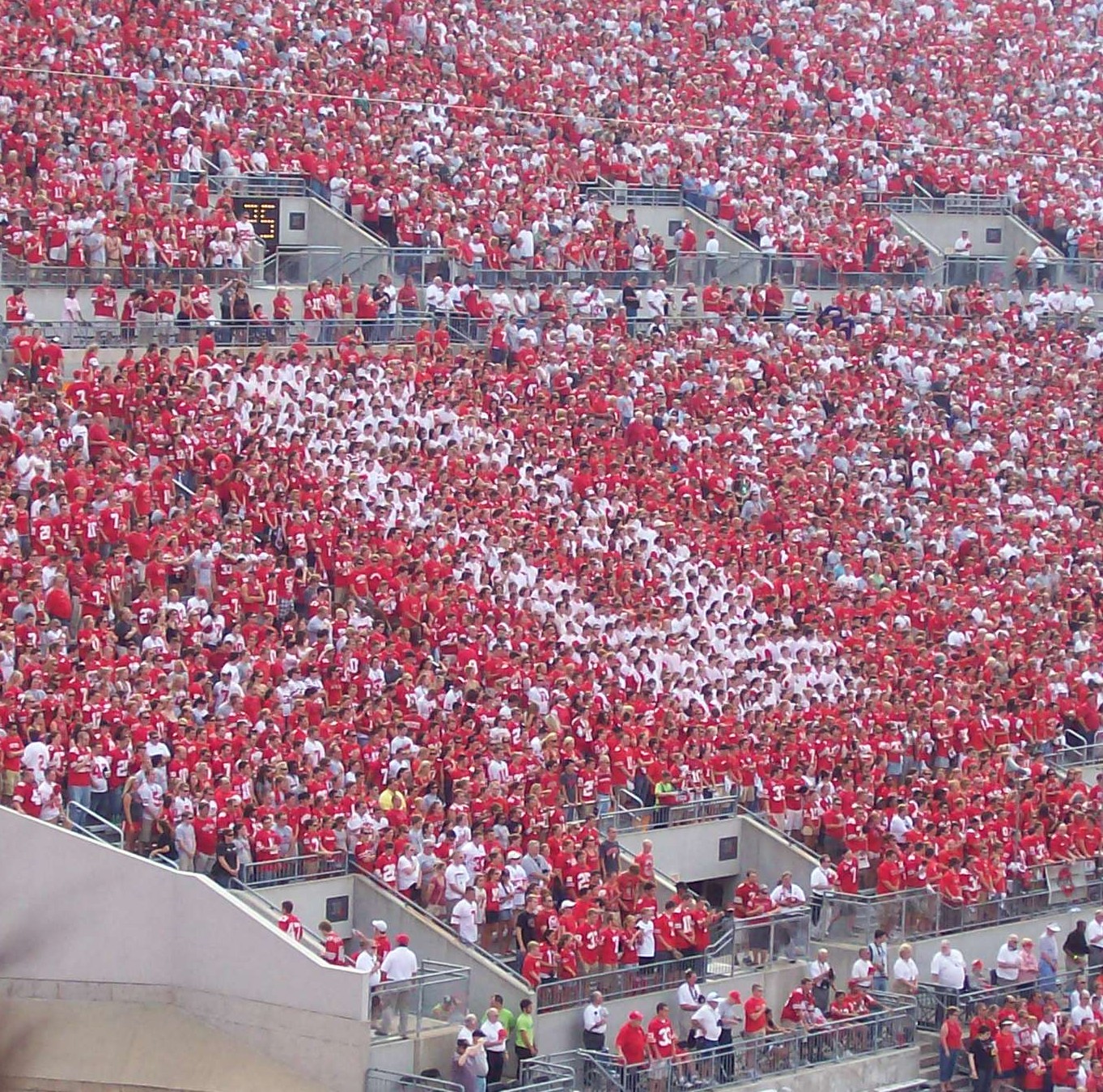 While this web site has been concerned with songs written about Ohio State, it seems logical to provide a page that list cheers used at Ohio State over the years. So, on this page are the several cheers that have been used. These cheers were obtained from various football programs, songbooks and song sheets that are available at The Ohio State University Archives.

1906 was not only the point where Ohio State settled on fewer songs, this year also saw Ohio State settle on fewer cheers, as well. The cheers listed below, from 1906 forward, are listed when they were first used, many cheers eventually went into disuse over the years. Today, there are only two cheers used and they are at the end of this page.

As noted on another location on this web site, World War I, Prohibition, the advent of radio, inexpensive Victrolas, and inexpensive recordings, would be major factors for the reduction of composing new songs and cheers. The Ohio State Alumni Association sponsored song contests in 1915 and 1922; there was also a song contest for Ohio Stadium, in 1919. However, only Buckeye Battle Cry, written in 1919, and Fight On Ohio, written in 1929, would be the only new songs composed during the Prohibition era.

The "Great Depression" and World War II saw very little composition of new cheers and songs. After the Second World War, World War II veterans tended to be older students and spent their time concentrating on courses offered under the GI Bill, and very little time on the non-academic side of college life. By the middle 1950s, college life, at Ohio State would return to normal; though the only one song, Carmen Ohio, Mine (1954), would be composed. Also, the advent of television would also be a contributing factor for the lack of composing new songs and cheers for entertainment purposes.

The 1960s, and the Vietnam War era, had students concentrating on the various social movements during that era, though Hang On Sloopy would become a new song for Ohio State in 1965. The Hang on Sloopy arrangement would be composed by The Ohio State Marching Band. Also, the traditional school spirit and other traditions would be lost during this era.

Since the Vietnam War era (1975 - Present), students have had many more options, then their counterparts from the early days of Ohio State, as technology advancements with the Internet, DVDs, CDs, Computers, iPods, Cable TV, etc. supplanting the need to entertain themselves with composing songs and cheers. During this period, only the Go Bucks Cheer (1983) would be composed. Also, some traditions lost during the 1960s, would return to Ohio State.

The following cheer was originally published in the December, 1883 issue of The Lantern:

The following cheer was originally published in the January, 1890 issue of The Lantern:

Heizu, Keizu, Whoa - Ho - Bang,
What will we do to the "has been gang",
Shut them out without a score,
Run ours up to twenty or more.

Wahoo, wahoo, Rip, Zip, Bazoo
Champions of Ohio we are too!
Wahoo, whaoo.

FYI: This cheer was in use in 1900, but
the earlier program did not provide the
the name of the ice cream parlor.
Found in the 1909 OSU - OWU football program;
the ice cream parlor is Moore & Ross.
It was located 152-4 North Ninth Street
in downtown Columbus (on Long Street, one
block east of Cleveland Avenue).

The following cheers were provided by Dr. Robert B. Stevenson:

Author Note: This is not meant to offend, but is provided
as a historical record. The vernacular of students had
gone through distinct changes over the years, and by
the middle 1960s the above language was considered acceptable
on college campuses.

(everyone) Oohm, oohm-gawa
(girls) Aaaaaaaaaaaha (sung from low to high note)
(guys) Bucks have got the power
The girls did the "Aaaaa" while the guys said their part,
then everyone says oohm-gawa. repeat several times.
Usually done after making a first down.

Then a different individual would lead the cheer.
Usually done three or four times in a row.

GO BUCKS!
(yell at the proper times when the band
plays the Go Bucks Cheer)

Follow the lead of Block "O":
(Repeat by stadium location)

South Side: O
West Side: H
North Side: I
East Side: O

A special thank you to Dr. Robert B. Stevenson and Tamar Chute, of The Ohio State University Archives, for providing me copies of several Ohio State Football Programs and Song Sheets going back to 1900.