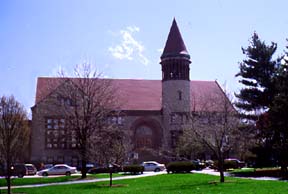 The Chimes of Orton Hall, as with The Oval, Mirror Lake Hollow and Ohio Stadium, the most recognized features on The Ohio State University campus. One cannot wander across Ohio State without hearing the Orton Hall Chimes. Usually, they will hear the quarter hour or hour struck; but, at certain times of the day, they will also hear music emanating from the Orton Hall Tower. The chimes originally consisted of 12 bells, tuned to D-flat, and were a gift from the Ohio State classes of 1906 - 1914; they were installed in 1915. Two additional bells were installed, in the late 1990s, during the recent renovation of Orton Hall. The new bells are tuned to G-sharp and A-flat, giving them an additional octave range and allow for playing additional music selections.

Fred Cornell, class of 1906 and composer of Carmen Ohio, also transposed several melodies to the Orton Hall Chimes. He submitted an article to The Ohio State University Monthly (April, 1915) about the three melodies below. He suggested that The Day be played at the start of the day (between 7:55 AM and 8:00 AM), The Noon-Tune between 11:55 AM and 12:00, and Echo The Bells at the close of the day (between 4:55 PM and 5:00 PM). The starting times of each song were to occur when students were moving between classes. Below are the three Fred Cornell compositions:

These compositions date over 90 years and can be still heard today, as you walk across the Oval or wander through Mirror Lake Hollow. Westminster Quarters is the most familiar, as it is used to chime the quarter hours and the hour. It is this rendition that is used by The Ohio State Marching Band when they play before Carmen Ohio. Oxford Changes and Chimes Melody are few of the many selections that are generally played weekdays at 12:00 Noon and at 5:00 P. M., by the Chime-Ringers of Orton Hall.