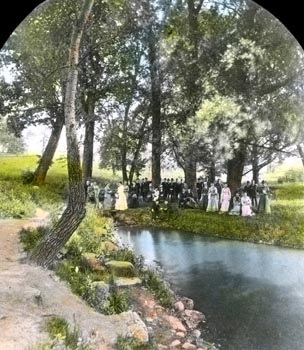 Down By the Riverside


This song is an example of a popular song of the day being adapted to life at Ohio State University. While Down by the Riverside in itself was a popular ballad, The Ohio State adaptation was designed to have fun or to make fun of life in general. This song was written in the 1890s, in a care free time, and this can be seen from the lyrics.

The reference to "Olentangy" refers to Olentangy Park which was located about a couple miles north of the Ohio State University campus, just south of Clintonville. Over the years, Columbus grew north and eventually annexed Clintonville into the City of Columbus. Urban growth eventually led to the closure of Olentangy Park. On the site today, are a collection of brick apartment buildings, built the late 1930s, between High Street and the Olentangy River, at the point just north of where Neil Avenue makes a sharp right-turn towards High Street, and becomes North Street. On the northern boundary is the site of a Giant Eagle Supermarket (formerly Big Bear). There once was a bowling alley on the supermarket site, but it burned down in the early 1980s.

The following is from the History of Clintonville Web Site:

"The property occupied by Olentangy Village was once an amusement park. The park was first called The Villa, opened in 1893 by Robert M. Turner. In 1896, the Columbus Street and Railroad Company bought the property and renamed it Olentangy Park. It quickly gained renown as one of the city's most beautiful spots. In 1899, the Dussenbury brothers purchased the park, which featured a small merry-go-round. The Dussenburys were responsible for the construction of a theater, a dance pavilion and rides such as the loop-the-loop, whirlwind and shoot the chutes. During the 44 years the park was open, it featured four roller coasters (Red Devil, Racer, Figure 8, and Whirlwind), the Ye Olde Mill, a swimming pool, two Ferris wheels, a pony track, a train ride, two carousels, and many more attractions. In 1938, the park was sold to L.L. LeVeque, and was turned into the Olentangy Village apartment complex. Today the only reminder of the park is the swimming pool at Olentangy Village." The above link has a few postcard images of Olentangy Park.

The reference to "O. S. U. Spring" concerns the area of campus known today as Mirror Lake. In 1868, the State of Ohio wanted to establish a land-grant institution of higher learning in Columbus, Ohio. The trustees, of the soon to be established university, searched several sites around Columbus and came upon a small artesian stream on the Neil Farm located about 5 miles from north of Columbus. They enjoyed the taste of the water and decided to establish Ohio A&M (The Ohio State University) on the site.

Between Ohio State's founding, in 1870, and 1891, the spring area would see little development. Accounts, during this period, will describe the spring area as bogs, lakettes, pools, etc. The water remained fit to drink and it was a very popular area for the Ohio State community. Old maps indicate irregularly shaped bodies of water, but nothing that resembles the Mirror Lake of today.

In 1891, the City of Columbus had reached The Ohio State University campus and urban growth led to causing the spring to stop flowing, by running a sewer line through campus. The Ohio State University's trustees eventually had the sewer condemned and spent $600 to restore the flow of the spring. In 1891, a grotto was built to direct the spring so it can be used to create an artificial lake, Mirror Lake, by creating a small dam about 200 feet west of the grotto. It was at this time Mirror Lake took on the form of its elongated oval shape. In 1895, an astronomical observatory would be built south of Mirror Lake hollow, it would be later razed in the early 1980s.

Between 1891 and 1925, there were several improvements made to the Mirror Lake area, including man made islands, bridges, stone work along the shore line, etc. However, on August 12, 1918, a tornado cut through the Mirror Lake area and destroyed these improvements. It would take until 1920, before the cleanup of the area was complete, but the islands and bridges would be lost forever.

In 1925, the urban growth of the City of Columbus and extensive construction on The Ohio State University campus, caused the spring to no longer flow. Thanks to the classes of 1927, 1929, and 1930, they raised funds to tap an another underground water source, in order to pump the water to feed Mirror Lake. Unfortunately, the new underground source had an high sulphur content, thus rendering Mirror Lake water undrinkable. In 1935, a Greek Amphitheater was constructed just east of Mirror lake and additional stone work was completed around the lake area.

By the 1970s, the area of Mirror Lake became neglected, the sidewalks needed replacement and the area plantings became overgrown. Subsequent renovations of the area, in the late 1970s and late 1990s, included replacing the sidewalks, rebuilding the wall around Mirror Lake's shore, installation of water filters, and a spray fountain. The advances in filtration technology has eliminated much of the sulphur content, and has returned Mirror Lake to one of the pristine spots on The Ohio State University campus; except, the water quality has not been restored to the purity of the original "O. S. U. Spring".

More about Mirror Lake, and the Ohio State Oval, can be found on the main menu.