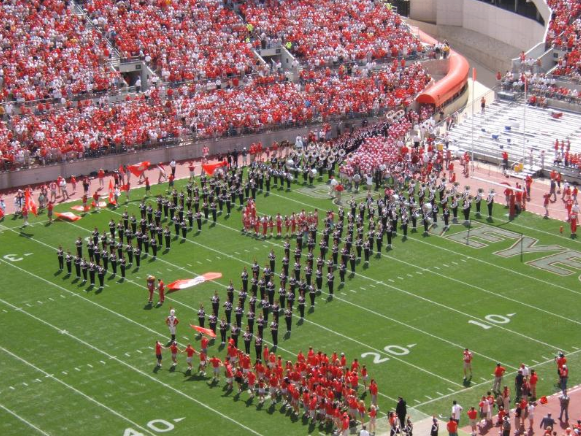 Fanfare for a New Era


This song dates back to 2001, and was written to honor the recently completed Ohio Stadium renovations; that is "a start of a new era". This song melds two melodies: Buckeye Battle Cry and Carmen Ohio in a stirring instrumental arrangement composed by Dr. Jon Woods; Director of The Ohio State Marching Band.

Starting with the 2001 football season, The Ohio State Marching Band plays Fanfare for a New Era near the end of their pre-game performance. At that point, They march down the field to the south end zone and they form a corridor of honor (usually with Varsity "O" Football letter winners of previous years, at the Homecoming, the home Ohio State - Michigan and other important Ohio State football games) to usher in The Ohio State University Buckeyes Football Team into Ohio Stadium. Once the football team runs on to the field, then The Ohio State Marching Band plays Across the Field, followed by the "National Anthem"; The Star Spangled Banner, which concludes their pre-game performance.

I wish to thank Bandon Heipp for providing some of background for Fanfare for a New Era.