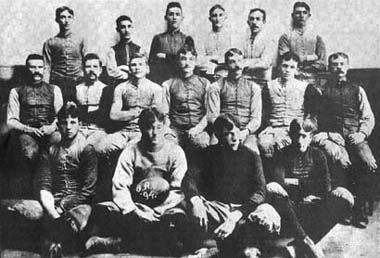 Our Football Song or Our Old Song

Ev'ry college has a ball team beneath the rose;
Ev'ry loyal college fellow to the ball game goes;
We've a ball team you all know it, just as well as we;
Ev'ry evening you can see it practice before tea.

Our ball team's the team of the State;
It's going to settle our fate;
In the great Kenyon game
Our players should aim
To run up a score of a dozen or more;
Dressed up in our scarlet and gray;
And feeling lighthearted and gay;
We'll cheer ev'ry gain
Through sunshine and rain
And win for our college the day.

2 - 4 - 5 - 8 shouts our captain, while their rushers yield;
Yard by yard the ball is carried down the football field;
Grit and courage, weight and muscle willingly they lend
Through the centre for a touch-down or around the end.

Then you'll see our backs and quarter interfering "fine,"
While they rush the battered football o'er the Kenyon line;
And the campus with our loud and hearty cheers shall ring;
While together to the praise of O. S. U. we sing.


This song was discovered in the recently released Lantern archives. It dates back to 28 November, 1894 and it was written by members of the newly formed college chorus, which was organized around October, 1894. The college chorus was not affiliated with the Men's Glee Club, but consisted of students, faculty, staff and Glee Club members. Effectively, it was sort of an exploratory committee to come up with school songs for Ohio State. An article appearing on November 7, 1894 described creating an organization that would teach the student body college songs and to come up with songs of there own. Since the groups first meeting, until the time this song was published, this organization was able to compose the following songs (in addition to Our Football Song):

The torch for song composition would be passed to the O. S. U. Men's Glee Club, whose songs are noted on other pages on this web site.

While Wahoo! Wahoo! is documented to be Ohio Stae's first "fight song", Our Football Song is Ohio State's first football specific fight song. It was in use from at least 1894 - 1898. There are no references to this song in 1899 or beyond. Chances are it was supplanted by Scarlet and Gray March and a number of songs which varied by season and opponents. It will not be until 1906 when Ohio (later I Wanna Go Back to Ohio State ) will become Ohio State's first long lasting fight song.

So, like Song of the Franklins, Our Football Song is a long lost song that virtually vanished from history. The melody of the song is My Sweetheart's the Man in the Moon a popular standard which was written in 1892. It was certainly the norm for college songs of the day, that is, writing new lyrics to popular melodies.

Back when this song was written, Ohio State played football games against Ohio schools. The rivalries of the day were Kenyon, Ohio Wesleyan, Case Western and Dennison. It would be 22 years, after this song is written, that Ohio State will burst on the national scene, in 1916. But, in this era, Ohio State was a small Midwestern agricultural college playing against other small Ohio schools, for state bragging rights, in the Ohio Athletic Conference. Kenyon was the traditional Thanksgiving football game; hence, the reference to Kenyon in the song. It is suspected that the appropriate opponents name was substituted in the lyrics.