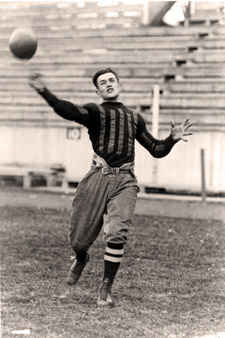 There's Football in the Air

There's football in the air,
When Ohio State is there,
They've won the Western Conference
And they got it fair and square.

The beat old Illinois
And also the Hoosier boys
Northwestern was their victims
Wisconsin were their toys.


There's Football in the Air was a song written to celebrate Ohio State's first Big 10 Conference Championship in 1916. This championship elevated Ohio State's football program, and the athletics program, to the next level. This song was written by Lawrence Maltby, class of 1913, to the melody of There's Music in the Air. The song mentions many of the players on the 1916 football team. It also mentions John W. Wilce, one of the greatest coaches in Ohio State history. The song was published in the January, 1917 issue of the Ohio State University Monthly. It was first performed by a quartet in Dayton on 1 December, 1916 at the Ohio State Day celebration. The song was submiited for publication by W. N. Zurfluh, class of 1894.

The following is from the Bucknuts Ohio State History Web Site

The 1916 win over Northwestern was the biggest win the Buckeyes have ever had over the Wildcats. The 23-3 victory allowed the Buckeyes to win their first ever conference championship as well as go undefeated. Northwestern gave the Bucks a struggle at first, but OSU started to break the game open with the help of Chic Harley's 63-yard TD run around right end. Head Coach John Wilce went on to dub this famous play "The Perfect Play." The Buckeyes would score two more times after that play to take home the championship.

John W. Wilce (1913-1928) 78 Wins, 33 Losses, 9 Ties, .688 Winning Pct.
John Wilce's teams are responsible for creating the fever and love that fans have for Buckeye football. His teams were the first ones that became recognized everywhere as under his reign, OSU got their first All-American in Boyd Cherry (and 14 All-Americans in all), their first superstar in Chic Harley, and three conference championships. Wilce stepped down in 1928 to practice medicine. The OSU fight song "Across the Field" was written as a tribute to Wilce.

Chic Harley was arguably the very first Buckeye great and is still a very important figure in Buckeye history. Chic was the first OSU player ever to win multiple All-American honors and is one of only six players to be an All-American three times at OSU. A Buckeye in 1916, 1917, and 1919, Chic was the key member of the first two Buckeye teams to win Big Ten titles. The record of the teams that he played on was a whopping 21-1-1. The 1917 team was so dominant that it outscored opponents 292-6.

Chic's legacy is still standing in the middle of the OSU campus. Because of Chic's play, fans started coming out to Buckeye games in record numbers, and soon, OSU would be forced to build a new stadium -- Ohio Stadium. Thusly, Ohio Stadium was dubbed, "The House that Harley Built." Harley is a member of the College Football Hall of fame.