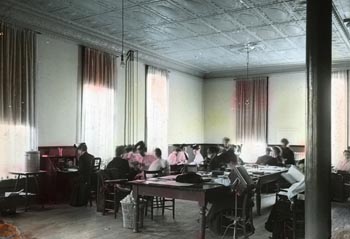 There is a gab room that I know,
And there the co-eds always go,
And gab, gab, gab, as though they were possessed,
And never, never take a rest.
Fare thee well, for I must leave thee,
You can now no more deceive me,
For 'tis evident the best of girls must gab, gab, gab.
Adieu, adieu, fair ones, adieu!
Pray keep on gabbing till you're through!
But I must go where cool breezes blow,
You're gabbing fills my soul with woe!

They chatter from morn till night;
They put the students in a fright;
They scare the cats in Henry Osborn's lab;
With their reverberating gab.
Fare thee well, for I must leave thee,
Is there naught that can relieve me,,
From the burden of this everlasting gab, gab, gab.
Adieu, adieu, fair ones, adieu!
Pray chatter on till you are through!
But I must go where cool breezes blow,
You're gabbing fills my soul with woe!

But after all what would we do
If there were no girls at O. S. U.?
I think we'd say 'twas a very dull day
That took our fair co-eds away.
Fare thee well, for I must leave thee,
I do pray that you'll believe me,,
When I ask that we the best of friends may part.
Adieu, adieu, fair ones, adieu!
We know your hearts are good and true,
As for gab, and as for chatter,
Indeed that really doesn't matter.


Gab Room Song was produced by T. Herbert Dickinson, a member of The Ohio State University Men's Glee Club, in 1896. It was performed once on December 18, 1896, according to a notation in Songs of the Scarlet and Gray. This is the only song, in the song books, that actually gives a precise date for the debut of a particular song. This song may have only been only performed once, thus making Gab Room Song a rarity among rarities.

The term "gab room" refers to a parlor that was in University Hall, where ladies would go to relax between classes. In the early days of Ohio State, most, if not all, of the classes were held in University Hall. The lyrics of the song make references to "the cats in Henry Osborn's lab", which indicated the multi-functional nature of the use of University Hall. In addition, University Hall served as a chapel, housing for faculty and students, classrooms, and lab space, during its early tenure. Between 1872 and 1894, smaller buildings, student quarters, barns, workshops, etc. would be built on campus, but University Hall will remain the center of life. In 1894, Orton Hall, now the oldest building on campus, will be the first step in the building of The Ohio State University campus. Today, Ohio State has over four hundred buildings its main campus and regional campuses combined.

In regards to the subject manner of the song, it might be considered offensive by today's standards. The song was written in fun and should be taken in that light. There is no intention to offend anyone, by including this song, but to provide an historical perspective of late 19th century life at Ohio State.