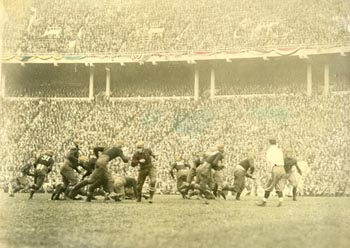 There's a place in Scioto's valley,
Where every Joe and Chip and Charlie,
Learn a thing or so,
And they call it Ohio;
We've got a football team that's famous,
All you've got to do is name us,
Someone who can shame us,
We'll show them a thing or two.

So we'll sing for Ohio,
Just as long as the clouds roll along,
And we'll fight for Ohio,
If we win, if we lose, we'll still sing this song;
For in Columbus town,
Ohio's spirit will never be down;
Take the ball right down the field,
Show them, we'll never yield,
"Round" on the ends and "HI" in the middle,
O-HI-O!

In that school by the old Sciota,
No one there gives one iota,
Whence you came or why,
That's the ray of a real buckeye.
Freshman Soph'more, Junior, Senior,
The way they love that school will beam ya,
From your pa they'll wean ya,
I'm telling you no lie.


in 1919, Frank Crumit composed Hi Hi Ohio. This song will eventually be on the "B" side of a 10 inch 78 RPM recording that contained Buckeye Battle Cry (Victor Orthophonic #19468). The recording was recorded, by Frank Crumit, in Camden, New Jersey, on 26 September, 1924, as noted on www.vitaphone.org. Mr. Crumit's peformance was accompanied by Adam Carroll on the piano and the Charles A. Prince orchestra. It is not known if Hi Hi Ohio gained any popularity, after the release of this recording, but we all know what happened with Buckeye Battle Cry.

On 13 December, 2005, David Powers of Columbus, Ohio, contacted me by e-mail and sent me the long-sought lyrics to Hi Hi Ohio. He has in his possession the recording mentioned in the previous paragraph, and he transcribed the lyrics you see above. This contribution is greatly appreciated, as this was a very difficult song to locate in any form. In addition, Mr. Powers has made a digital recording of the 1924 record and you can listen to it, by clicking above. It is hoped that by providing the recording, this song will never be lost again.

Hi Hi Ohio was performed by The Ohio State University Marching Band, on 5 November, 2003, to celebrate the 80th anniversary of Mr. Crumit's composition. I was able to obtain a score of Hi Hi Ohio from The Ohio State University Marching Band. A special thank you goes out to the folks who helped me out on the Friday before the 2004 Ohio State - Michigan game, it is greatly appreciated. The score I obtained was the John Tatgenhorst arrangement of the song, which was performed by the OSUMB on the date noted above. I chose to use brass instead of piano, in the MP3 file, as it seemed more appropriate. If you have the time visit the new Steinbrenner Band Center, in the NE side of Ohio Stadium, the facility is fantastic!

Finally, I discovered this article which describes how The Ohio State University Marching Band was introduced to Hi Hi Ohio. This article also offers a facinating story about Frank Crumit and the history of this song and Buckeye Battle Cry.

The following article was published in the Summer, 2006 issue of TBDBITLetter:

As a collector of early Edison cylinder phonographs and ephemera, I attend several antique phonograph music shows every year, hoping to discover that one great find that every collector enjoys and expects at least once in their lifetime. My collection consists of over seventy rare Edison phonographs and thousands of records, many from the first days of recorded sound, including one of the earliest known recordings of the United States Marine Band from 1889. While hoping to purchase an early electric phonograph and expecting to locate some good cylinder records at a show in April, 2002, I found an item that would prove to be quite significant for both TBDBITL as well as The Ohio State University. While digging through a carton of old shellac 78rpm records (which I do not collect!), my attention suddenly turned to the black and gold Victor label below the Nipper dog trademark, where I thought I saw the name Frank Crumit. Somewhat surprised, I thought that I misread the label, but there it was: "Hi-Hi-Ohio", college song with orchestra, (F. Crumit). $5.00 for a near-mint record by the composer of Ohio State's fight song proved to be a no-brainer, even if the song was written for his alma mater, Ohio University. I vividly recall listening to the song for the first time and hearing Frank Crumit singing and playing the piano to orchestral accompaniment. "For in Columbus town, Ohio spirit will never be down, Take that ball right down the field show them we'll never yield, Round On The Ends And High In The Middle, O-HI-O!!!!". Wow! Pretty powerful stuff, Frank! But wait a minute, did he say Columbus?

Frank Crumit was born in Jackson, Ohio, in 1889. He played football for Ohio University, where he hoped to follow in his grandfather's footsteps to become a physician. He eventually earned a degree in Electrical Engineering, which he gave up to pursue a career as a musician. By 1913, he was performing vaudeville, playing ukulele and singing the tunes of the day while further developing his songwriting skills. Years later, George Trautman, his brother-in-law and OSU athletic director, asked Frank if he could write a song for the dedication ceremonies of the new Ohio Stadium. Crumit agreed, and in 1919 wrote "Hi-Hi-Ohio". A second song, "The Buckeye Battle Cry". (A Football Song of Ohio State University), soon followed. Frank preferred "The Buckeye Battle Cry", and decided to submit this composition for the dedication of Ohio Stadium. Over time, he became exceedingly proud of this composition, and would attend the OSU-Michigan game every year hence until his sudden death from a heart attack in 1943 to "hear my song by the band I like best". Crumit eventually recorded both OSU school songs acoustically, in the era prior to the microphone and the electric recording process, on the Victor label in 1924. "The Buckeye Battle Cry" and "Hi-Hi-Ohio" would become both Frank Crumit's and Victor's poorest selling recordings of all time. It is incredibly ironic that while his best selling records, "A Gay Caballero" and "There's No-one With Endurance Like The Man Who Sells Insurance", are known to only a handful of the most hardcore audiophiles, "The Buckeye Battle Cry" can be heard by millions nationwide on any football Saturday.

Since the earliest days of recorded sound on wax cylinder records in 1888, the playing time of records was 2 minutes. Although the "long-play", 4 minute cylinder was introduced in 1908, most songs remained basic 2 minute compositions with the song actually played twice to fill the additional 2 minutes of the record. Consequently, two minutes remained the average playing time of most songs, as well as marches, that were composed after 1889. The 78rpm shellac disc records, such as "Hi-Hi-Ohio" and "The Buckeye Battle Cry", also lasted about 2 minutes. However, other similarities exist between these 2 Crumit compositions. Both recordings consist of a basic framework of intro-verse-chorus, with the chorus the more powerful and stirring section, and are written at a tempo of 120 beats per minute. In addition, both songs have a very similar feel, with the choruses comprised of 3 predominant pulses per phrase. If the chorus of "Hi-Hi-Ohio" was to be played at 180 beats per minute and was arranged less true to the original Crumit recording (as is "The Buckeye Battle Cry" in its current arrangement), the 2 songs would have an eerily-similar feel. The origins of "The Buckeye Battle Cry" lie within the phrases of "Hi-Hi-Ohio". Unmistakably Frank Crumit.

While researching and discussing Frank Crumit and "Hi-Hi-Ohio" with other record collectors/researchers, I decided that the discovery of this heretofore forgotten, unknown school song written expressly for The Ohio State Marching Band and The Ohio State University should not go unnoticed. It was my belief that this record is of particular historic importance to Buckeye Nation, and MUST be played. I proceeded to contact John Tatgenhorst, one of the senior arrangers for TBDBITL, and asked him about the possibility of arranging the song for the marching band. A deal was struck, and I received a copy of the arrangement in late 2002. Unfortunately, it was too late to present the composition for the 2002 season. "Hi-Hi-Ohio" would have to wait until the 2003 season for its unveiling. Dr. Jon Woods was most gracious in allowing me to present the Scarlet and Grey-framed recording of "Hi-Hi-Ohio" to both he and TBDBITL during the Veterans Memorial Concert on November 3, 2003. Eighty-four years after its composition, "Hi-Hi-Ohio". the "lost" OSU school song by Frank Crumit, was finally performed by the band for which it was originally written. Legions of Buckeye faithful can now enjoy the in-spiring phrases of Frank Crumit's forgotten melodic gem!