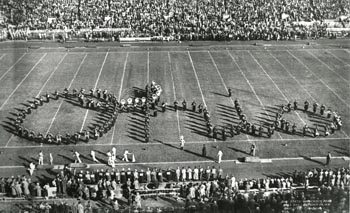 All these proud children of Gaule
Went without truce and rest,
With their rifles on the shoulder.
Courage in the heart and back bag,
Glory was their food.
They were without bread, without shoes
There, they slept on the hard one
With their bags like pillows.

The regiment of Sambre and Meuse
Always went to the cry of "Freedom",
Seeking the glorious road
Who led to immortality.

To beat us, they were a hundred and thousand;
At their head, they had kings.
The General, weak old man,
Weakens for the first time.
Indicator certain the defeat,
It brings together all its soldiers.
Then it made beat the retirement
But they did not listen to it.

The shock was similar to the lightning.
It was a combat of giant.
Drunk of glory, drunk of powder,
To die they tightened the rows.
The regiment by the grapeshot
Was attacked of everywhere.
However alive wall,
Impassive, remained upright.

The number was right of courage.
A soldier remained, the last.
It was defended with rage,
But soon prisoner was made.
By seeing this savage hero,
The enemy cried over his fate.
The hero took a cartridge,
The Jura, then gave itself death.

The regiment of Sambre and Meuse,
Receipt death with the cry of "Freedom",
But its glorious history
He give right to immortality.

Translated from the original French lyrics.

"And now, the most memorable tradition in college band history, The Incomparable Script Ohio." Thousands upon thousands of people heard these words within the confines of Ohio Stadium. They know that they are to be witnesses to the spectacle known as Script Ohio. Their hands come together joining the percussion section in the rhythmic beat of the song known as Le Règiment. Though many know and associate Le Règiment with the performance of Script Ohio, few people know the history behind this driving march.

The song now beloved by Ohio State alumni, the student body, faculty, and many others, gains its origins from a French military poem written by Paul Cèzano in the late 1870's entitled Le Règiment de Sambre et Meuse. The inspiration for this poem came from the folk tales of France's Revolutionary period when France was invaded by European monarchs. In order to repel these invaders, France held the first large scale military draft, bringing in crude peasants and making them into crude soldiers. The stories continue, accounting for bravery of these disliked peasant soldiers as they fought on after being ordered to retreat. The poem focuses on the bravery of these men and the French hunger for victory.

In 1871, French composer Jean Robert Planquette set Cèzano's poem to a simple melody which was to become a favorite to the French public. The lyrics were translated into many languages and the song traveled throughout the world. In 1879, Sambre et Meuse was arranged into a military march by Joseph François Rauski, and in the 1890's, pianists and orchestral arrangers also produced arrangements of the march, each giving credit lines and references to Planquette and Rauski. The popularity of this march had grown to such an extent, that it gained recognition as one of the most popular marches by a German encyclopedia. In the United States, the first copyrighted arrangements of Le Règiment were by Carl Fischer in 1904 and his band arrangement in 1908. A flurry of copyright activity followed with a flock of arrangements for piano, orchestras, men's glee clubs, and in a community song book published in Chicago. In 1937, release of Fischer's arrangement neglected to have the names of Planquette and Rauski in the credits, thus hiding the true origins of the piece.

Professor Eugene Weigel, the Director of the OSUMB from 1929-1939, had played in a Navy band during World War I. Sambre et Meuse had been a popular song during this period, and it is believed that he learned of the march at this time. The year Professor Weigel came to Ohio State, the concert band played Sambre et Meuse and the piece was soon added to the Marching Band repertoire. OSUMB was still using the 1908 arrangement by Carl Fischer even for the first performance of Script Ohio. It was not until the 1940's that the OSUMB made its own arrangement of Le Règiment. In 1964, Richard Heine produced the version currently in use on Football Saturdays. This version as well as the earlier OSUMB version failed to mention any names of the previous composers. The song's history remained unknown until 1978 when OSUMB alumni took the time to recapture the history of this song.

Courtesy of Robert M. Goodman is a more detailed history which can be viewed here. here

An incomplete copy of the original composition can be viewed here. Courtesy of the National Library of Australia.

The following is a close piano redition of Jean Robert Planquette's score, obtained from a different source. While this is not the original score, it gives the reader an idea of how the original piano score sounded.