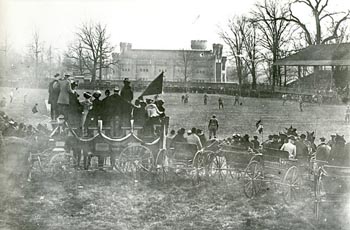 We Don't Give a Damn for the Whole State of Michigan

In addition to the rivalry between Ohio and Michigan, the rivalry between Ohio State and Michigan is the most storied in college football history. Though, Michigan leads the series and say that their true rival is Michigan State University, the Ohio State - Michigan series is always hard fought. In many of the games, since 1940, the Game has played a role in determining the Big Ten Champion, Rose Bowl, and the National Championship.

It is no small wonder how We Don't Give a Damn for the Whole State of Michigan came about. Though a very popular song, especially when Ohio State plays Michigan annually in the Big Game, it is unknown when the OSUMB arrangement was composed.

The song appeared in the movie The Male Animal (1942), which was based on a play written in 1940 by James Thurber. In the movie, the song was entitled as We Don't Give a Darn for the Whole State of Michigan. The National Board of Review, the agency responsible for reviewing movie content, had the film producers of The Male Animal use "darn" instead of "damn". One must speculate that their decision was based upon The Male Animal being a comedy and audiences were still uncomfortable after "damn" was first spoken in Gone with the Wind (1939).

James Thurber, an alumnus of The Ohio State University, and a famous writer and cartoonist, contributed his expertise to the production of the Broadway show. It is unknown if this song was written for the movie or was already in use beforehand.

Even though Ohio State is not mentioned in the productions, it is quite obvious that Thurber's Buckeye roots were showing. As indicated by the following:

1. In the play and movie, there are a couple references to Hennicks, a former drug store and soda fountain which existed well into the 1950s on High Street; the main commercial center on the eastern boundary of The Ohio State University campus.
2. In the play, there is a mention of people heading to the pre game pep rally and they were gathering at the "Neil Avenue gate".
3. In the play and movie, the characters tune to frequency 1210 AM to listen to the game; 1230 is an AM frequency which is assigned to Columbus, Ohio.
4. In the play and movie, during the radio broadcast of the game between Michigan and Midwestern State, the Midwestern State team is referred to as the Scarlet Wave (movie) or Scarlet Stampede (play).
5. In the movie, one can hear the melody of Ohio(I Wanna Go Back to Ohio State), substituting "Midwestern" for "Ohio", being sung by the crowd several times as people are heading to the pep rally, going to the game and returning from the game.
6. In the movie, before a pep rally and after the game, the Midwestern State Marching Band is shown marching through the streets. Their uniforms look very similar to those used by The Ohio State University Marching Band (circa 1940).

Note: In the movie, a night time pep rally is presented, but it was not included in the play.

Of course, The Male Animal also is mocking big time football, over zealous Alumni, the Board of Trustees, faculty, students and any any other target James Thurber could come up with. There are side story lines which include:

1. An English professor (main character) who wants to read a letter in his class from Bartolomeo Vanzetti (of Socco-Vanzetti fame) and this causes a great deal of issues between himself and the Board of Trustees. That is, reading a letter from an anarchist.
2. The English professor's wife and an old flame from her college days which causes a bit of marital tension.
3. Board of Trustees and the new stadium construction fund, the importance of football over academics, etc.
4. Of course, it is Michigan game weekend.

One should alway be aware that good comedy gets you to laugh at yourself and others, and James Thurber was able to do this very well.

Finally, the melody of the song is The Old Gray Mare (Ain't What She Used to Be), thus making it easy to sing and remember. The OSUMB sings this song as they enter St. John Arena for the Skull Sessions prior to every home game. At that time, you will find the surrounding crowd joining in!

Major Credit: A huge thank you to John Wozniak for extracting this song from the Skull Session Medley

The following is a piano rendition of We Don't Give A Damn For The Whole State Of Michigan. It uses the orginal music score for The Old Grey Mare by Frank Panella, which was written in 1915.