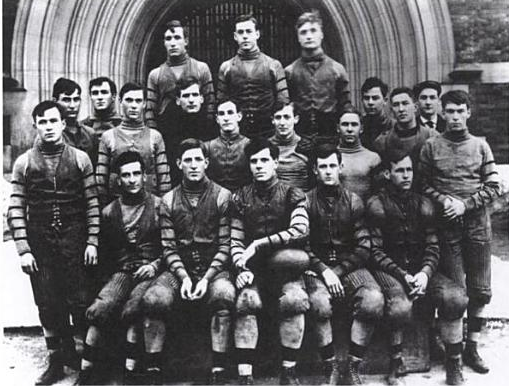 The recording above is courtesy of Dave Powers. The recording was performed by the Gennett Symphony Orchestra, and was sold by Gennett Records (#10045). It was recorded in 1922 on the "B" side of the 78 RPM recording Football Songs of The Ohio State University. The "B" side contained Ohio and Across the Field. The above link plays only the instrumental of Ohio.

Ohio owes its roots to the (University of) California Drinking Song. Ohio, like the California Drinking Song combines melodies from multiple songs. The most recognized melody comes from the song Oh, Didn't He Ramble, which was written by Will Hanby, with collaboration of Ragtime musicians Cole and Johnson, in 1906. Later that year, the song California was written, by an unknown author, using the chorus portion of Oh, Didn't He Ramble. More information about the University of California connection can be found here.

With special thanks to Dr. Robert B. Stevenson, I received a copy of the 29 November, 1906 football program "Yells and Songs" page. On that page were the lyrics to this song, thus dating both Ohio and California to 1906. Missing from this version, were lines 6 and 7 above; they were added in 1907, as noted below.

Ohio uses the same lyrics as California, except "Ohio" was substituted for "California". For your information, the hills referred to in the song, are the hills that surround Berkeley. Lines one through five use the melody of the chorus from Oh Didn't He Ramble. Lines 6 through 9, use a melody similar to Son of a Gambolier (If I Had A Daughter). Lines 10 through 14 revert back to the melody of the Oh Didn't He Ramble chorus.

The references to "drink" and "keg of booze" (lines 6 & 7 above) were not original to Ohio. These lines, to the melody of Son of a Gombolier, were added between 1906 and 1907. They were published on the 28 November, 1907 football program "Yells and Songs" page. These lines were changed, in 1919, due to Prohibition. Once Prohibition ended, then the original lyrics were restored to Ohio.

The following is the piano version of Ohio.