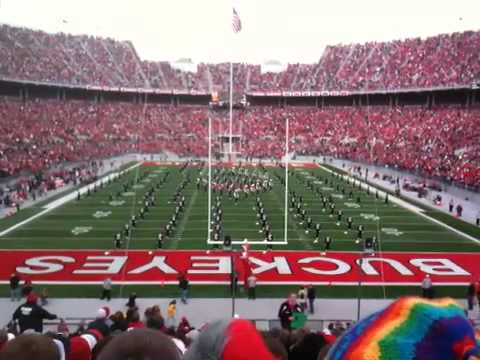 
According to Charlie King, who contributed information about this song, The Ohio State University Athletics Department, prior to the 2008 football season,  requested the directors of the Ohio State University Marching Band (OSUMB) to come up with a short cheer which could be used for first downs, short time outs, get the crowd into the game, etc. In order to do this, the band directors contacted  Mike Stewart, a former Graduate Assistant to the OSUMB. Mr. Stewart was the Band Director of the University of Tennessee Volunteer Marching Band, at the time of the request. Mr. Stewart sent several cheers to the OSUMB. After reviewing several cheers, the directors chose the Let's Go Vols cheer.

According to Mr. King, the technical aspects of the song is as follows. Ohio - Let's Go Bucks is a 4 chromatic step up echoes in half notes, then the same pattern in quarter notes, then straight quarter notes going up chromatically from the second to last pitch played in the first two lines and holding some higher pitch, then silence and a cheer.

Authors Note:  For identification purposes on this web site, the name Ohio - Let's Go Bucks Cheer was chosen for this song so not to confuse it with Let's Go Bucks!.

I wish to thank Charlie King for the MP3 recording of this song and for his contribution. Unfortunately, due to copyright/revenue issues, I cannot provide Mr. King's MP3 contribution.

This is not the first time Ohio State has borrowed a melody from another college. There are several examples of this on the web site, in regards to fight songs and ballads.

Please e-mail any comments, problems or suggestions to njmetrowsky@gmail.com