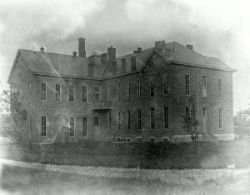 We've skimped, and sent that boy to fill
The holler in his head with knowledge;
He wasn't good for much, but still,
We thought he might pull through a college.
La, la, la, la, la, la, la.
We guessed he'd study up at nights,
Work hard to mend his mind and natur;
And here is the young Philistine writes,--
He's deep in love with his Alma Mater.

We'd better keep him tendin' corn,
An' feedin' pigs an' doin' plowin',
Since he's a student-- in a horn,
An' spendin' money I'm allowin'.
La, la, la, la, la, la, la.
Then Hettie, neighbor Squigg's gal,
Ah, how the news will circumstrate her;
I'd allus picked her out for Hal;
Now he's deep in love with Alma Mater.

I've heard about those college chaps,
An' read about 'em in the papers,
An' Hal, he's one of the perhaps
An' thick in all their scarpes an' capers.
La, la, la, la, la, la, la.
He wrote to us he was doin' fine,
Was somethin' of a wimmin hater;
An' now we see he was a lyin',
An' spendin' time with his Alma Mater.

Last night we wrote a letter warm
A-sayin', we are led to statin'
He'd better come an' work the farm,
An', we 'ud help his graduatin'.
La, la, la, la, la, la, la.
That he could pack his college rigs,
Or he'd discover, soon or later,
It's better sparkin' Hettie Squiggs
Then makin' love to Alma Mater.


An O. S. U. Love Story was not a romance song, but a song to make fun at Agriculture majors. In addition, it made fun at farmers, as well, in regards to stereotyping farmers as ignorant, illiterate and speaking in an unsophisticated vernacular. While this song may be considered offensive by 21st Century standards of "political correctness", one must understand that this song was composed to make light of college life. Also, Ohio State was a "land grant" institution and was established for the purpose of advancing Agriculture; therefore, those who sung this song were making light at themselves, many of whom were Agriculture majors. This song was written and sung by The Ohio State University Men's Glee Club, and it was probably in general use by the student body.

Anyway, what is wrong being in love with your Alma Mater? Ohio State is only second in student enrollment to the University of Texas-Austin. Ohio State has the largest number of dedicated Alumni of any school in the country. The Ohio State Alumni Association has thousands of life time and sustaining members. Ohio State Alumni and friends have contributed several billion dollars to advance the research and education mission of Ohio State. An average of 106,000 fans per game filled Ohio Stadium last year to cheer on the Buckeyes. Thousands more attended other sporting and cultural events on the Ohio State campus. Thousands of Buckeyes can't be wrong, and have something to be proud of with their dedication to Ohio State. So, there is nothing wrong to be in love with your Alma Mater. GO BUCKS!