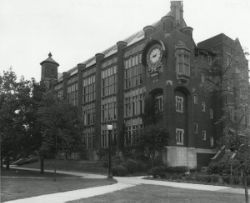 *: Substitute * in each of the verses, as follows:


Peanuts was written, by an unknown member of The Ohio State University Men's Glee Club, in the 1890s. By far, this is one of the most strangest songs in the history of Ohio State. It is unknown if this song was used as an Men's Glee Club standard or as a drinking song among the students, or both. One can see, as they progress through the song, it gets more complicated to sing, as you are trying to say more words, in a limited time period. That is, you are singing two or three syllables in verse one, but by verse seven you are squeezing in over 60 syllables! Imagine singing this song after several drinks! Most likely, as this song progressed to the later verses, the music would stop for a time for everyone to speak the words, and the music would continue.