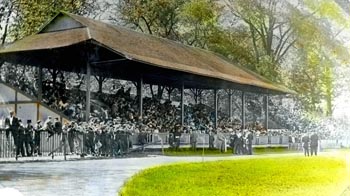 Last night I lay on my pillow,
Last night as I lay on my bed,
I dreamed of a big weeping willow,
Perceiving the Medics were dead.


This song was never published in the song books, but appeared in the 29 November, 1906 football program "Yells and Cheers" page; thus dating this song to at least 1905. It uses the melody of My Bonnie Lies Over The Ocean. This song was used as a fight song with Varsity and Wahoo! Wahoo!, but it faded from use sometime before 1916. This song is an excellent example of using a contemporary melody and penning new lyrics. It is possible this song was written by The Ohio State University Men's Glee Club.

Note: On 17 October, 1906, another variant of this song was published in The Ohio State University Lantern changing Medics in the last line to Michigan. This indicates that On The Sidelines was used multiple times and that the last line was changed depending on which opponent Ohio State was facing.