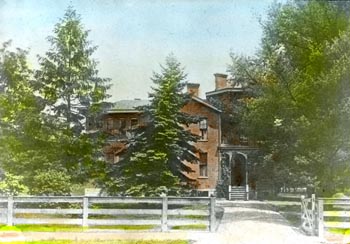 I Didn't Do A Thing But Smile

One day as I was walking to the university,
My books all bundled on a strap, as snug as snug could be,
I noticed coming towards me on the path across the farm,
A pretty maiden all alone her books held in her arm.
A tall and stately maiden, with a jaunty sailor hat;
She met me with a winning smile my heart went pit-a-pat;
'Twas the very one I long have sought, 'twas she whom I adored;--
We met just at the stile and bowed, without a single word.

We met again in class that day, again at the chapel hour,
Her brow was full of dignity and intellectual power,
Her face was quite illuminated when the choir began to sing,
She sang like a lark--and how they made the chapel ring!
And after chapel hour, I saw her to the "gab-room" bent;
I hastened to the outer door, my eyes to all intent--
Engaged in looking for a man, who wasn't there at all;
I then determined wait I would, till she came in the hall.

I had a recitation in the last hour of the day,
I knew she had one too, and so I hastened on my way--
My luck was with me, for I met her at the classroom door,
I motioned to her to wait on me, for rain begun to pour.
I asked her if she had a spare umbrella she would loan,
She smiled and said she "had none," then I offered her my own.
We walked home all alone that night, she made me happy quite
By telling me that I could walk home with her ev'ry night.


I Didn't Do a Thing But Smile was a ballad, written in the 1890s, by an unknown author. Also, this song runs almost three and a half minutes to tell a story; an unheard amount of time for songs of this era. This song tells the story of finding one's true love, thinking they lost her, but in the end they forge a lifetime together. It is very possible this song was in general use by at least The Ohio State University Men's Glee Club.

There are several items, about Ohio State, that are introduced in the lyrics, which also help date the song, to the early 1890s. First, the description of farmland, according to early maps of Ohio State, University Hall was surrounded by farmland owned by the University, the Neil family and other private farmers. The old maps also indicate a few scattered houses, out buildings, barns, but for the most part, University Hall was Ohio State. University Hall housed classrooms, laboratories, faculty offices, chapel and some living quarters. In addition, a parlor for co-eds to go between classes, which many called the "gab-room". University Hall would be the primary academic building from 1870 until 1894, at which time the new Science Building (Orton Hall) would be built. The old maps, also show the spring that fed into Neil's Run, which eventually flowed into the Olentangy River. A spillway will also be built in 1891, that will lead to the formation of Mirror Lake. Also, a grotto will be constructed to direct the spring to the new Mirror Lake. Finally, on the eastern boundary of Ohio State, the street known today as High Street, was named Columbus-Worthington Pike. More information about early Ohio State history is also provided in Down By The Riverside. 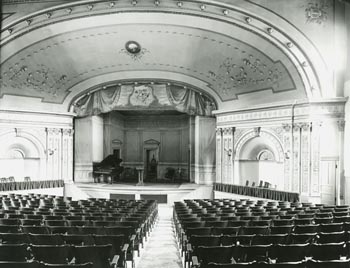