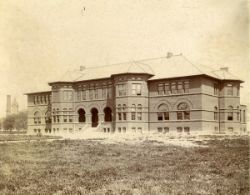 As for the song, it uses the melody of Tit Willow (or On a tree, by a river) from the Gilbert and Sullivan operetta, The Mikado, which was written in 1885. Lantern Subscriptions is an example of a song written to a melody of a contemporary song which was popular at the time.