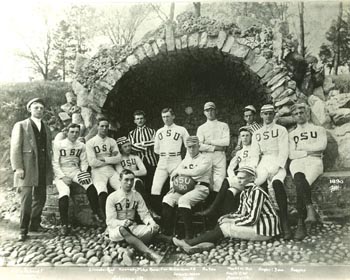 
Before Carmen Ohio and Across the Field, there was Wahoo! Wahoo!. It was written in response to other colleges having their own fight songs in the late 19th and early 20th centuries. The general feelings of the time, were yells were not enough, so college fight songs started to evolve using familiar melodies of the time. It should be noted that originally Wahoo! Wahoo! was a cheer that was put to music.

The first appearance of Wahoo! Wahoo!, in The Lantern, occurred in January, 1890 as part of an article on the newly formed Men's Glee Club's performance. At that time, Ohio State students referred to their sports teams team as the Wahoos. From September, 1892 - November, 1892, The Lantern was called The Wahoo. In The Lantern (The Wahoo), circa 1890 - 1910, there are several references to Wahoo! Wahoo!. The words of the song were published several times, with at least one reference, which indicated that the melody Roll, Jordan, Roll was used. Also, The Lantern (The Wahoo) indicated that this song was very popular with the student body and Men's Glee Club. Unfortunately, there are no references on who wrote the song, why the Roll, Jordan, Roll's melody was chosen, the OSUMB arrangement (if any) for the song, and if there were additional verses and words. The Wahoo, like the Buckeye, are native trees to Ohio. It is possible that as Ohio was referred to as "The Buckeye State", that the students of Ohio State started referring to their teams as the "Buckeyes", after 1910. Because Roll, Jordan, Roll was a song that came about during slavery, a spiritual, it is quite possible that the meter of the song was changed, in order to use the melody as a college fight song.

Wahoo! Wahoo! was mainly in use from at least 1890 (1889 as a cheer), until sometime during the 1920s. It should be noted that in 1902, the University of Michigan came up with their own lyrics for Wahoo! Wahoo!, in order to taunt the Buckeyes, in Ann Arbor. It must have worked, as Ohio State lost the game 86-0; the worse loss in Ohio State football history. Maybe it was just as well, because as the result of that game came the inspiration for Carmen Ohio. Also, the 1902 Ohio State-Michigan game was the start of the storied Ohio State-Michigan rivalry. A footnote, the 1902 Michigan team went undefeated that year outscoring their opponents 644 - 0 over 12 games.

With the adoption of Across the Field as Ohio State's fight song, Wahoo! Wahoo! began to fade out of general use. However, the "bridge" in Across the Field, contain the lyrics: Wahoo, Wahoo for Ohio. Though rarely sung today, the original Ohio State cheer remains preserved, in song, even to this day.

So, for over thirty years, When the Scarlet and Gray took the field, and was battling for scores, it was Wahoo! Wahoo! that the OSUMB played, and the crowd sang, to send them on to victory. Imagine a Saturday afternoon at Ohio Field, with 5,000 fans screaming yells and singing Wahoo! Wahoo!! And, now imagine this song fading from use, but not from memory. While Wahoo! Wahoo! is no longer an Ohio State fight song or cheer, it still lives on in the song Campus Echoes, which is sung to this day by The Ohio State University Men's Glee Club. Continuing a tradition which dates back to 1891.

Authors Note: The second and third stanzas were actually different cheers put to the same melody as Wahoo! Wahoo!. It is unknown if all three stanzas were sung together or as separate "songs" depending on what was going on during a game. The second stanza appears in Songs of Ohio State University. The third stanza appears in Songs of the Scarlet and Gray.

This song was published in The Lantern on 5 December, 1894. The original melody used was the chorus of There's Music in the Air by the newly formed college chorus (See Our Football Song). In 1895, the OSU Men's Glee Club adopted the melody of Roll, Jordan, Roll (See O. S. U. Medley). Both melodies were in use through 1898.